Ever since the first European set foot in Australia, the need for money influenced the economic life of the new settlement.

Especially in the first years, the economy was based on the English coins, brought from The United Kingdom. The value of the coins was nominally the same as in the UK Great Britain coins and the system the same.

But as every new settlement, soon the need for money for everyday life created a great demand for coins, especially in precious metal.

In the colony of New South Wales, founded in 1788, the need was so urgent that the measures were radical.

The governor Lachlan Macquarie, former major-general and the last aristocratic governor of New South Wales (1810-1821), tried to solve this problem soon after his arrival (1810-1811).

He realized that if he will try to use English coins, he will be forced to bring them from the UK. But the problems that this demand will cause will be much bigger then the benefit itself. First of all, the distance between the 2 lands is very large and the naval route dangerous, especially in some seasons. A demand will be positively satisfied only after a long period of time.

Also, in this moment, the UK is fighting Napoleon with all the power, including the financial one. And Napoleon ruled the entire Europe, at the heights of his power.

Macquarie asked the closest British possession for help. In India, the East India Company had enough financial power to help him.

The sum asked for the New South Wales was 10000 pounds. But East India Company wasn’t able to satisfy exactly this demand. Why? Because they didn’t worked with pounds because in the region that it operates, the main coin was the Spanish silver thaler of 8 reals ( or coloquial the tolar =dollar).

The Spanish dollar was used frequently in this region. Also a mint in Phillipines produced nice quality pieces and it wasn’t so war. And The Company had large quantities available.

The Spanish 8 real was equal as value with a 5 shilling coin or the crown (1/4 of a pound). Macquarie decided that a circulation of these coins, as they are, in the region will cause a problem.

Why? First off all, this region is not Spanish. Second, people are used with the British monetary system. And most important, they need small coins also, not only large and high value coins.

He decided to mint this coin in a special way. The coin was given a central hole that cut the Spanish coat of arms and king’s effigy. The hole was given with a special tool.

On the edges of the hole, a text was stamped. It wrote NEW SOUTH WALES- 1813/5 SHILLINGS.

The Spanish 8 reals coin brought here were originally minted from 1782-1810 (with only one from 1757, very rare) and produced in various mints from the Spanish colonies (Mexico, Bolivia, Peru) or even Spain (Sevilla Mint).

The state won also. A fully weight 8 reals was equal to a 5 shilling coins. But now the new coin was 25 % lighter. This meant that the 25% silver content ( the holes…) remained to the state and also no one will try to export this coin anywhere else, where this coin will have a 25 % less value.

With the silver holes, the benefit of the states, a small coin was minted, for use in small transaction. The coin had the value of 15 pence, or 1 ¼ shilling.

The coin was minted from the holes. It depicts on one side a crown and the legend NEW SOUTH WALES 1813 and on the other side FIFTEEN/PENCE. Depending on the edge, varieties are known.

They were used by the population until 1822. Then, they were officially replaced with British coins. A short period of time, probably not after 1825-1830, they were used local.

People changed it in most of the cases. They were aware that the coins were not equal to a official crown and they asked for the fully weigh coins.

The mintage was low, 40000 pcs for each value. It is estimated that today only 350 Holey dollars and around 1500 Holes can be found by collectors. The prices are high, usually thousands of dllars in wear condition. And probably tens of thousands for a high degree conservation state. A KM 2.5, Holey dollar, F-, minted on a Mexican 8 real 1757, the rarest of all, realized 16,000 US$ in Spink Auction, many years ago. 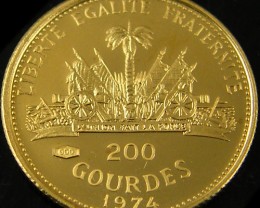 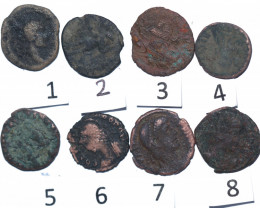 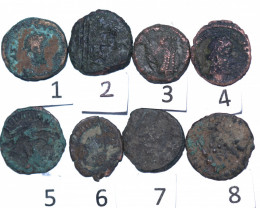 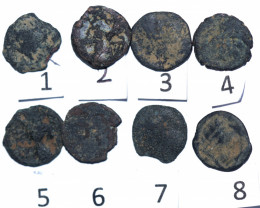