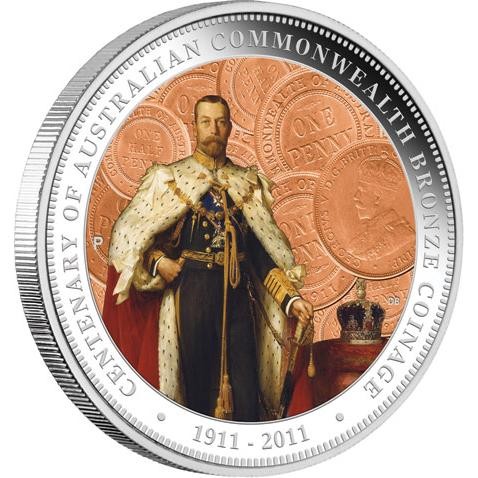 This spectacular silver commemorative marks 100 years of Commonwealth coins.  Australia’s first penny and halfpenny were issued in 1911. Made by the Royal Mint in England, the obverse portrayed Sir E.B. Mackennal’s effigy of King George V, who had ascended to the throne on the death of his father, King Edward VII, on 6 May 1910.

This commemorative issue is struck from 1oz of 99.9% pure silver in proof quality.

The coin is issued as legal tender under the Australian Currency Act 1965.

The coloured reverse of the 2011 commemorative coin portrays King George V and a montage of the first distinctive Australian penny and halfpenny coins.

The coin’s obverse depicts the Ian Rank-Broadley effigy of Her Majesty Queen Elizabeth II and the 2011 year-date.

Presentation Case and Certificate of Authenticity

The coin is housed in a presentation case and customised shipper, accompanied by a numbered Certificate of Authenticity.