Pre Chris tian Ireland had a very strict set of laws which usually involved a payment by the perpetrator of a crime to the vic tim or the vic tim \‘s family. The punishment for default of this payment was death. The records of these laws (mostly dating from Chris tian era documents) state that slaves and cattle were an accepted similar payment. Most likely smaller exchanges were made on a similar basis with tools and ornaments.

There are a number of gold and gold plated rings found in Irish and other celtic contexts referred to as \‘ring money\’. The variation in the quality and standard of these pieces does not suggest a fixed denomination but rather that these items were used like hack silver and examined at every exchange.

The earliest coinage which affected the North West of Europe was the Macedonian coinage of Philip II and Alexander III (the Great). This extensive coinage became the model for many of the crude copies produced by the celts of Germany ,  France and Southern England . There is no evidence that the celts in Ireland struck their own copies of this currency but the English and continental coins are occasionally found in Ireland .

The Roman conquest of Europe extended to England but not fully to Ireland although an encampment north of Dublin was briefly established in the first century AD. Roman coins are found in an Irish context but mostly mixed with other ornaments and hack silver indicating that the coinage was not acknowledged as a medium of exchange at a set value but rather as another piece of precious metal to be assayed at every exchange. In support of this theory it is interesting to note that the Roman coins found in Ireland are most often of silver or gold and rarely the copper pieces which are found in large quantities in the rest of \‘Roman Europe\’.

During the \‘Dark Ages\’ in Europe , after the fall of the Roman empire , few coins were in use in Ireland on the basis of the hoard evidence. However, metalwork was at a very high level of skill and quality and many hoards of silver and gold ornaments have been found. It is normally assumed that any coin that arrived in Ireland was quickly melted and used to manufacture such ornaments. 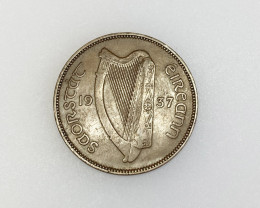