The peso is the current currency for Cuba . Before 1857, Spanish and Spanish colonial reales circulated on Cuba . From 1857, banknotes were issued specifically for use on Cuba . These were denominated in pesos, with 1 peso = 8 reales. From 1869, notes were also issued denominated in centavos, with 100 centavos = 1 peso. In 1881, the peso was pegged to the U.S. dollar at par. The currency continued to be issued only in paper form until 1915, when the first coins were issued. 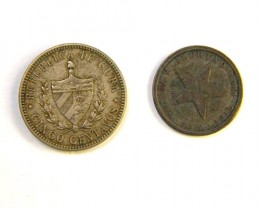