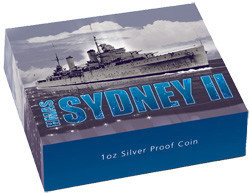 Following a deadly engagement with the German raider HSK Kormoran November 1941, the famous Royal Australian Navy cruiser HMAS Sydney II was lost with 645 officers and crew in the Indian Ocean. Her fate proved baffling until the Finding Sydney Foundation announced on 16 March 2008 that it had located the wreck approximately 207km off the Western Australian coast.

The Perth Mint marks the historic discovery of HMAS Sydney II with this superb commemorative coin struck from 1oz of 99.9% pure silver in proof quality.

The coin’s reverse depicts HMAS Sydney II, a 6,830 tons modified Leander class cruiser with an illustrious battle record. The ship’s image is accompanied by the inscription HMAS SYDNEY II 19 NOVEMBER 1941 ~ 16 MARCH 2008, which highlights the 67 years she lay undiscovered on the seabed, and The Perth Mint’s ‘P’ mintmark.

Befitting HMAS Sydney II’s enormous historical and cultural significance, the coin is issued as legal tender under the Australian Currency Act 1965. The Ian Rank-Broadley effigy of Her Majesty Queen Elizabeth II and the 2008 year-date appear on the coin’s obverse.

The Perth Mint will strike no more than 7,500 of these coins, of which just 5,000 will be released individually. The remaining 2,500 are available in a stunning Coin, Medallion and Badge Set (see separate entry).

Individual coins are housed in a blue display case and magnificently illustrated shipper. 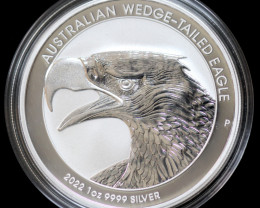 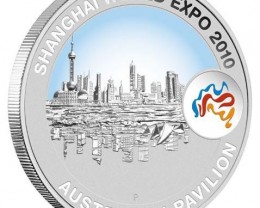 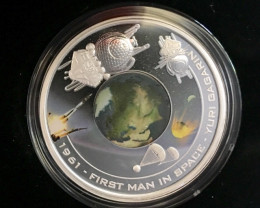