The mark was the main currency of Estonia between 1919 and 1928. It was initially equivalent to the German Papiermark, which had been circulating alongside the Russian/Soviet ruble since the German occupation. It was divided into 100 penni.

Estonian coins were issued in denominations of 1, 3, 5 and 10 marka between 1922 and 1926. Struck in cupro-nickel were the 1922 coins whilst the later issues were struck in nickel-bronze. 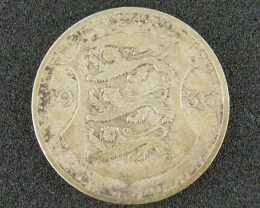