The colón was also the currency of El Salvador between 1919 and 2001. The currency was named after Christopher Columbus, known as Cristóbal Colón in Spanish. Because the colón replaced the peso at par, 1 and 5 centavos coins issued before 1919 continued to be issued without design change after the colón\‘s introduction. In 1921, cupro-nickel 10 centavos were introduced, followed by silver 25 centavos in 1943. In 1953, silver 50 centavos were introduced alongside smaller silver 25 centavos. Both were replaced by nickel coins in 1970. In 1974, nickel-brass 2 and 3 centavos coins were introduced, followed by 1 colón coins in 1984. 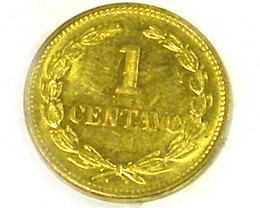