The currency of the Dominican Republic is the peso oro. The symbol for this currency is “$”, with “RD$” used when distinction from other pesos is required. Each peso is divided into 100 centavos, for which the ¢ symbol is used. Only one denomination of coin was issued by the Dominican Republic before decimalization. This was the ¼ real, issued in 1844 in bronze and in both 1844 and 1848 in brass. Decimalization in 1877 brought about the introduction of three new coins, the 1, 2½ and 5 centavos. 1¼ centavo coins were also issued between 1882 and 1888. After the franco was abandoned, silver coins were introduced in 1897 in denominations of 10 and 20 centavos, ½ and 1 peso. The designs of these coins were very similar to those of the franco. 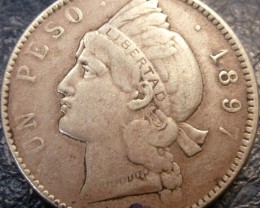 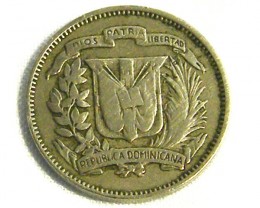 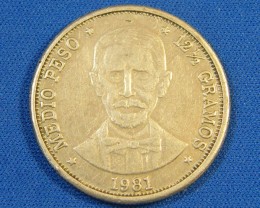