1oz Silver Proof Coin Series The Battle of Salamis 480BC 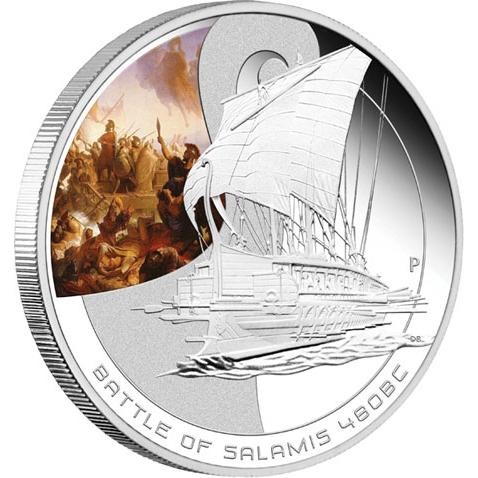 tHIS COIN HAS SOLD OUT AT PERTH MINTH

Battle of Salamis 480BC

A pivotal encounter of Greco-Persian Wars in the 5th century BC, the Battle of Salamis resulted in an improbable victory for the vastly outnumbered ships of the Greek alliance.  Greek commander Themistocles devised a brilliant strategy that lured the large Persian fleet into the narrow strait between the island of Salamis and the Athenian port-city of Piraeus.  Here the Greek triremes attacked furiously, ramming and boarding the tightly-packed formation of Persian ships which had difficulty turning in the restricted channel.  Estimates put Greek losses as low as 40 ships out of a total of 380.  The much larger Persian fleet suffered greatly, however, losing hundreds of ships during the battle.  In the aftermath of Salamis, further decisive Greek victories at Plataea and Mycale effectively ended the invasion plans of Persia’s King Xerxes.

The coin’s reverse portrays a trireme, a fast and agile warship used by ancient civilisations of the Mediterranean between the 7th and 4th centuries BC.  The design, which includes the inscription BATTLE OF SALAMIS 480BC and The Perth Mint’s ‘P’ mintmark, also features a coloured section depicting a battle scene.